I’m stoked to share this blog tour on my blog today! Helen is a good friend and an excellent writer. I’ve read this fantastic book myself. Check out my review here: Relative Strangers

Meet Sophie Morgan… practical, Welsh, prone to occasional profanity, and seemingly a vampire magnet. Sophie Morgan is 23 and has always done the right thing. She’s caused no stress for her family, worked hard through university, has taken a successful leap onto the career ladder and nurtured a reasonably healthy bank balance. It’s no small surprise then when, on a post relationship break-up, mini-break to Antwerp, she pursues a pair of thieves who steal her friend’s handbag. But this is only the start of her world being turned upside down. Ripped from the streets into a dark alley she is violently attacked, barely alive when quirky Irish bar worker, Michael Kelly, stumbles across the scene. The pair, shocked by their experience and uncertain whether they have killed her attacker in the brawl which follows, go into the night for answers. They get more than they bargained for. Sophie quickly learns that vampires exist, her neighbours back home aren’t what they seem and new boyfriends can be found in the strangest of situations. Relative Strangers is the first in a new vampire series with a distinctly British flavour, but which will appeal to everyone. Reviews call it ” a vampire tale with bite”, with “brilliant characters that draw you in” and a very fresh take on the genre. Read it now to find out reviewers are raving about.

My eyes scanned the stomping mass of people on the pub floor, eventually locking onto Tracy’s brunette head bobbing up and down at the front of the crowd. I occasionally caught a flash of her face as people moved around her. She looked in her element. I hoped that she had made it to the lavatory before she started all that jumping up and down. Mopping up the dance floor was not my idea of a good time.
I turned back towards the bar to see the barman standing opposite me, wiping down the bar with a towel and following my gaze in the direction of my friend. I looked down to see two large glasses of Guinness in front of me.
“Don’t tell me she’s abandoned you so soon?” he asked.
“Oh yeah,” I muttered, shrugging my shoulders. “She’s just having fun.”
“And you’re not? That hurts.” He clutched the damp bar towel to his chest. “Words can cut like a knife you know.”
He was smiling and I involuntarily smiled back. I wasn’t sure if this was part of some cheeky chap routine he put on for female customers, but he seemed genuine enough and clearly didn’t think too much of himself given his unkempt hair and aged band tee shirt. I knew it was Led Zeppelin; I’d grown up on my mother’s record collection. He had good taste in music and an appealing face, in a non-conventional ‘Rory Gallagher meets Joaquin Phoenix’ sort of a way.
“What can I say? I was miserable and then you came along,” I replied, trying to wear what I hoped was an easy going smile. Was I flirting? Maybe I was, I wasn’t entirely sure, but whatever I was doing, I quite liked it, especially behind the safety of the bar counter and the knowledge that he was still on the clock. Nice, safe, flirting; just what you need on the rebound.
He wiped his hands off on a towel and dropped in onto the counter at the rear of the bar. “Michael Kelly, County Derry,” he remarked cheerfully, his hand still outstretched. “My friends call me Mickey.”
“Hey Mickey – what a pity you don’t understand.” I cringed at the cheesy eighties pop reference. Sure, like he’s never heard that before. Getting over my embarrassment, I reciprocated the gesture and we shook hands.
“Sophie Morgan,” I said. “People just call me Sophie.” 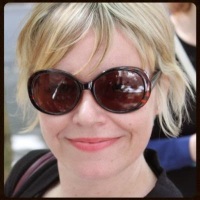 After a successful career in business and career coaching, Helen Treharne returned to South Wales in 2010 to focus on writing, among other things.
Relative Strangers, a modern vampire story featuring an increasingly feisty Sophie Morgan, hits digital bookshelves in 2014. In addition to being the creator of the developing”Sophie Morgan” series, she is an urban poet and social commentator who can frequently be found ranting in the Twitterverse. She knew the degree in Sociology would come in handy some day!
Helen lives with her husband, three cats, an entrenched tea addiction and an increasing collection of stringed instruments.She can’t be trusted near stationery.
Author Links:
Goodreads | Twitter | Facebook | Website